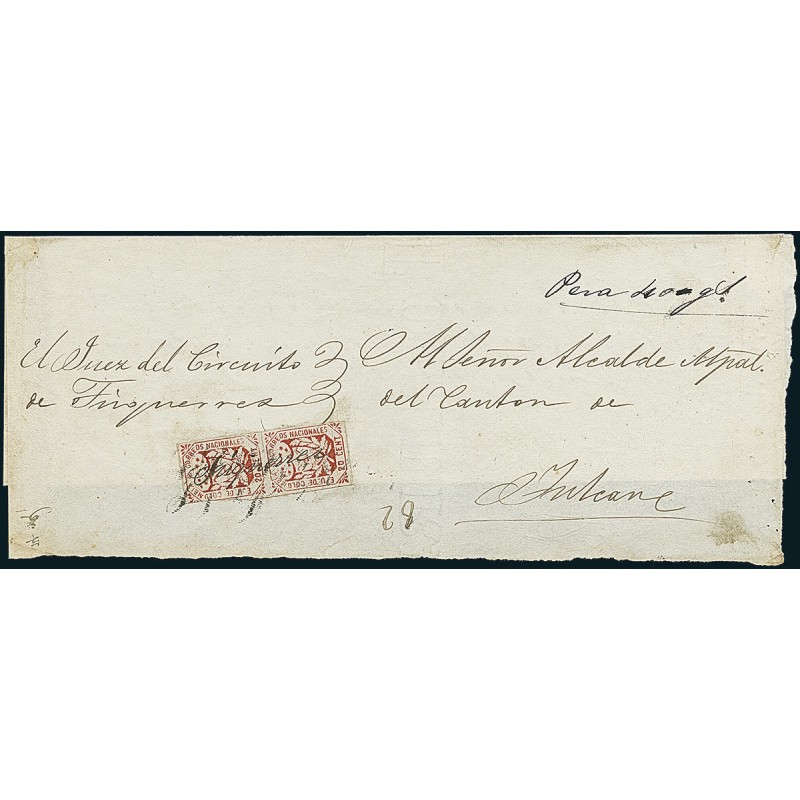 Undated judicial cover sent to Tulcan (Ecuador), endorsed "Pesa 40-gs" denoting theweight, bearing two 1864 20 c. scarlet in vertical pair, cancelled on dispatch showing "Túquerres" in manuscript. Apostal convention, signed on 24.11.1838 by the three countries which previously formed the Gran Colombia: Colombia, Ecuador and Venezuela, established that mail from, and sent to, any of these three countries was fully prepaid to final destination by only paying the portion of the journey from the locality of dispatch to the border, i.e. the internal tariff; in this instance, 40 centavos covered eight-times the single rate for a cover weighing between 40 and 45 grams carried within a distance of 50 kms., this corresponding to the length between Túrquerres and the bordering town of Tulcán in Ecuador. This theory clarify this special rate which has been a myste,y to collectors of Colombian postal history. A desirable item demonstrating the very rare application of the 1838 bordering external rate paying postage to destination. Only about five covers are known featuring a bordering external rate, being unique on judicial correspondence, and also the only recorded in the sixth issue. The only cover recorded possessing this franking, and one of just about five covers recorded bearing this value.
Moorhouse certificate. Scott 32. Ex Goeggel