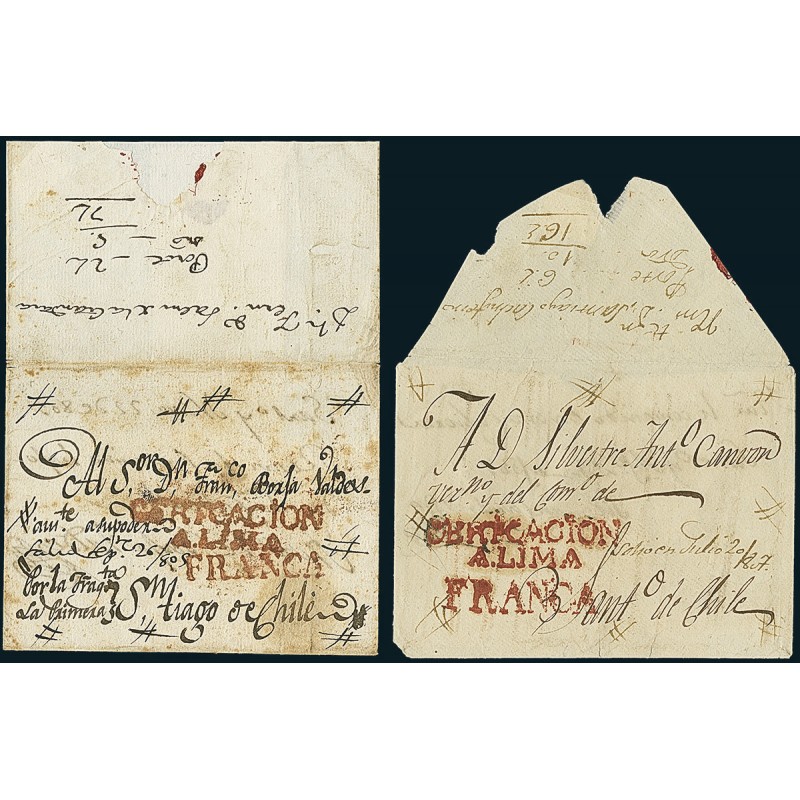 26 September 1805: Folded registered cover from Lima to Santiago (Chile), carried by the"La Primera" frigate as endorsed at lower left, bearing bold strikes of "Certifcacion/A.Lima" two-line and "Franca" straight-line handstamps in red, charged at double rate in manuscript on reverse for a total of 7 1/2 reales including 5 reales of the maritime fee. Annotated as received including date and signature inside, as stipulated for registered mail. Registered maritime mail is exceedingly scarce, and of great postal-history interest as an extraordinary service rarely used in this period, with only less than five maritime examples being known. Ex Kouri and Sitjà
Although not being maritime mail, a similar registered cover, bearing the same postmarks and dated 1807, August 29, is also included in this lot (exhibited in the following page) to demonstrate the difference between the maritime and overland rates, the former being of lower cost than the postage applied on mail conveyed overland to Chile; in this case, as handwritten on reverse, being 16 1/2 reales, including 1O reales registration fee.

(Item attached to the lot in the previous page)
As stated before, although this item (dated 29 August 1807) is not a maritime mail, it serves to demonstrate the difference between the maritime and overland rates, the former being of lower cost than the postage applied on mail conveyed overland to Chile.
This cover bears the same postmarks "Certificacion/ A.Lima" & Franca" twoline and straight-line handstamps, but the rate changes, being 16 1/2 reales, including 1O reales for the registration, the overland fee then costing 9 more reales than the mail carried by maritime means.